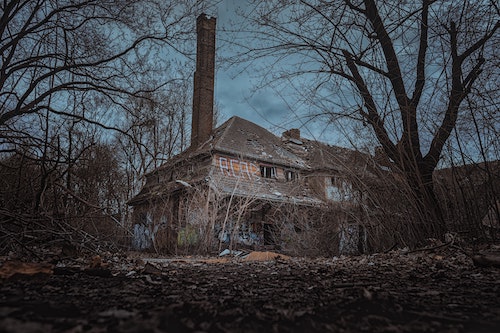 From punching Bigfoot to hunting Ancient Aliens - Every Tuesday, Rory Powers and Kit Grier investigate a different paranormal case and find the truth inside the mystery.

The Strange and Unusual Podcast

The unknown. It lies at the root of all fear, and has inspired legends, superstition, folklore, customs, hysteria, and even murder throughout history. Still today we feel the shadowy presence of our ancestors' struggles to explain the mysterious in almost every facet of our lives. Whether it be in the form of religion, urban legends, pop culture, ghost stories, superstitious rituals, and so much more we are still just fighting to keep our monsters in the dark. Welcome to The Strange and Unusual Podcast.

Join me for a bonus horror story reading of 'The Body-Snatcher' by Robert Louis Stevenson. If you haven't listened to episode 10, 'Grave Matters in Edinburgh', you may want to listen to that first, to hear the real-story of Burke and Hare, that inspired Stevenson's fiction. ... Read more

The NoSleep Podcast is a multi-award winning anthology series of original horror stories, with rich atmospheric music to enhance the frightening tales.

Welcome to our third thrilling threat of the terror tales we call Sleepless Decompositions. These are one-off, original horror stories which are created or curated in-house.   “The Face in the Woods” written by  [S.H. Cooper] (http://pippinacious.tumblr.com/)  (Story starts around 00:02:40) Produced by:  [Phil Michalski] (http://www.philmichalski.com/) Cast: Narrator – Jessica McEvoy, Sean – Mike DelGaudio “A Clear Head” written by Lana Walker (Story starts around 00:21:15) Produced by: Phil Michalski Cast: Narrator – Sarah Thomas, Kieron – Kyle Akers, Mom – Erin Lillis, Dad – Mike DelGaudio   This episode is sponsored by: [Headspace] (https://headspace.com/nosleep)  – Be kind to your mind. Less stressed. More resilient. Happier. It all starts with just a few minutes a day. Wouldn't it be great if there were a pocket-sized guide in an app that helped you sleep/focus/act/be better? There is. And, if you have 10 minutes, Headspace can change your life. Go to headspace.com/nosleep for a FREE ONE-MONTH TRIAL with access to Headspace's full library of meditations for every situation.     <a href= "http://contributors.thenosleeppodcast.com/" target="_blank" rel= "noopener">Click here to learn more about The NoSleep Podcast team</a>     [Click here to order Season Pass 16] (http://seasonpass.thenosleeppodcast.com/)     <a href= "https://www.kickstarter.com/projects/1418036943/onyx-the-fortuitous-and-the-talisman-of-souls" target="_blank" rel="noopener">Click here to learn more about the Kickstarter for “Onyx the Fortuitous and the Talisman of Souls”</a>     <a href= "https://www.youtube.com/channel/UC9UvlOBknCU5OLRHLCHTnmQ" target= "_blank" rel="noopener">Click here to learn more about Andrew Bowser</a>       Executive Producer & Host: David Cummings Musical score composed by: <a href= "http://www.wondroussound.com/" target="_blank" rel= "noopener">Brandon Boone</a> “Sleepless Decompositions” illustration courtesy of  [Kelly Turnbull] (http://thepunchlineismachismo.com/)   Audio program ©2021 – Creative Reason Media Inc. – All Rights Reserved – No reproduction or use of this content is permitted without the express written consent of Creative Reason Media Inc. The copyrights for each story are held by the respective authors. ... Read more

True horror stories written by those that made it out alive. First person accounts narrated and produced by Andrew Tate in an anthology of terror and suspense.

Stories in this episode: - [The Woman On Whites Bridge] (https://www.reddit.com/r/LetsNotMeet/comments/m1s3ej/the_woman_on_whites_bridge_with_pictures/) - [Sturrux] (https://www.reddit.com/user/Sturrux) . -The Peephole - Jasmine. -The Wrench - Anon. -My Mom Jinxed Me - Parker. -Whole Foods Man - Stella Marie. -Forced Uber - MJ. All of the stories you've heard this week were narrated and produced with the permission of their respective authors. Let's Not Meet: A True Horror Podcast is not associated with Reddit or any other message boards online. To submit your story to the show, send it to letsnotmeetstories@gmail.com. Get access to weekly bonus episodes of Let's Not Meet: A True Horror Podcast, ad-free versions of the free shows and a bunch of other great exclusive material and merch at [patreon.com/letsnotmeetpodcast] (http://patreon.com/letsnotmeetpodcast) . This podcast would not be possible to continue at this rate without the help of the support of the legendary LNM Patrons. Come join the family!  Thanks to Sapphire Sandalo (Stories with Sapphire), Soren Narnia (Knifepoint Horror), Shelby Scott (Scare You To Sleep), Christine Scheifer (And That's Why We Drink), and Em Schulz (And That's Why We Drink) for appearing on the live stream season finale! Check out their shows wherever you get your podcasts! Dark Air with Terry Carnation premieres April 1st and releases new episodes every Thursday. Listen on Apple Podcasts, Spotify, or wherever you get your podcasts. Get a special offer that includes a 4-week trial PLUS free postage and a digital scale. No long-term commitments or contracts. Just go to [Stamps.com] (http://Stamps.com) , click on the Microphone at the TOP of the homepage and type in MEET. Feals has me feeling my best every day and it can help you too.  Become a member today by going to [Feals.com/meet] (https://Feals.com/meet) and get 50% off your first order with free shipping. - Facebook - [https://www.facebook.com/groups/433173970399259/] (https://www.facebook.com/groups/433173970399259/) - Twitter - [https://twitter.com/letsnotmeetcast] (https://twitter.com/letsnotmeetcast) - Website - [https://letsnotmeetpodcast.com ] (https://letsnotmeetpodcast.com) - Patreon - [https://patreon.com/letsnotmeetpodcast ] (https://patreon.com/letsnotmeetpodcast) - Instagram - [https://www.instagram.com/letsnotmeetcast/ ] (https://www.instagram.com/letsnotmeetcast/) - Twitch - [https://twitch.tv/pizzatate] (https://twitch.tv/pizzatate)   ... Read more

History is full of stories we think we know. They are old and dark, but time has robbed us of perspective and clarity. They've become obscured and misunderstood. Which is why this series exists: to dig deep and shed light on some of history’s darkest moments. To help us better understand where we’ve come from. To make it Unobscured. Each season pairs narrative storytelling from Aaron Mahnke, creator of the hit podcast Lore, with prominent historian interviews. Season Three: Jack the Ripper

Our interview with writer Paul Begg. To wrap up our exploration of Whitechapel in 1888, we turn to the historian and researcher whose dedication to the original documents laid the foundation for deep and rigorous study of the murders. ... Read more

A podcast that explores the unexplained and explains the unexplored, Blurry Photos seeks the facts behind the fiction of the world’s most fascinating, unbelievable, and chilling mysteries and legends. Focusing on lesser-known topics of Forteana, conspiracy, history, and folklore, Blurry Photos is driven by the desire for a better understanding of fringe subjects through research, storytelling, and rational thinking. Prepare your butts, because it’s time to learn something weird.

BBC Radio 4's Danny Robins joins <a href= "http://www.blurryphotos.org/" target="_blank" rel= "noopener">Blurry Photos</a> to discuss his new podcast series The Battersea Poltergeist! A haunting in 1950's south London, the Battersea Poltergeist made the front pages then and made life for the Hitchings family unbearable. David welcomes producer, writer, and presenter Danny Robins on the show to talk about the case and his new podcast. The podcast includes a wonderful variety of investigation, interviews, and dramatic reenactments. Flora asks Danny about his experiences and journalism while making the show. It's a fascinating case brought to life by Danny and some great actors, including Burn Gorman, Dafne Keen, Toby Jones, and more! Listen to this interview and then download the series and binge away! Thanks to Danny and BBC Radio 4 for the use of episode clips, art, and the music of Nadine Shah! Don't forget to join the Blurry Photos <a href= "https://discord.gg/jCdmmDp" target="_blank" rel= "noopener noreferrer">Discord Server</a>! Watch me stream games on <a href= "https://www.twitch.tv/blurryphotos" target="_blank" rel= "noopener noreferrer">Twitch</a>! Music Myst on the Moor - Kevin MacLeod (incompetech.com) Licensed under Creative Commons: By Attribution 3.0 Battersea Poltergeist Sources ---Find out more about the show on <a href= "https://www.bbc.co.uk/programmes/p0940193/galleries" target= "_blank" rel="noopener">BBC Radio 4</a> ---Visit [Danny Robins' website] (http://dannyrobins.com/) ---Check out Danny's other series, <a href= "https://cms.megaphone.fm/channel/haunted" target="_blank" rel= "noopener">Haunted</a>   ... Read more

The world is more mysterious than most people are comfortable imagining. We cross paths with the mystical from time to time and may not even notice it. If we do, we quickly return to our usually mundane daily existence. But what if we not only acknowledged the unknown, we investigated it and spoke with those in the know? That’s what co-hosts Scott & Forrest, and their producer Tess Pfeifle do at Astonishing Legends. With the power of the well-vetted Astonishing Research Corps, they have access to information that most folks couldn’t find. Over 75 million downloads and hundreds of thousands of listeners have shown that exploring and embracing the wonders of our world can be not only enlightening but exciting.  Welcome to Astonishing Legends!

We have a very special guest joining us tonight, metaphysical "astralnaut," philosopher of the liminal, "Pope of the Paranormal," and host of the AM Radio talk show Dark Air, Terry Carnation.  Terry first got his start in the paranormal radio genre when unexpectedly thrust into taking over for another show.  While working as a late-night rock n' roll Disc Jockey for an FM station in Buffalo, NY, in 1992, Reginald Wilcox, the host of the paranormal call-in show that aired after Terry's slot was mysteriously murdered while Terry was in the bathroom... or so he claims.  In his unflappable sense of duty, apparently stronger than his sense of legal obligation, Terry immediately took over the role of consigliere for listeners stupefied by the supernatural. And in Terry's words, "that's how a legend was created." Now, after a three-year hiatus, Terry Carnation returns with a new podcast, also called Dark Air, available starting April 1, 2021, wherever podcasts are given away for free.  While you may not have heard of him, there will be something uneasily familiar about his voice and visage.  And the audience will come to know his strange power for tearing off the head of disbelief and reaching down deep into our souls to yank out the viscera of our darkest fears and mysteries.  Wrapped around our interview with Terry, our good buddy Rich Hatem joins us once again to discuss his latest adventures and projects.  We'll also con him into playing our version of a game show, in the spirit of America's NPR radio program Wait Wait... Don't Tell Me! and Britain's Would I Lie to You?  We'll tell Rich three outrageous paranormal stories, and he has to guess which one is fake.  Please join us for an episode of inscrutable levity.Visit our [website] (https://www.astonishinglegends.com/al-podcasts/2021/03/27/ep-205-terry-carnations-dark-air-and-richard-hatem) for a lot more information on this episode. ... Read more

Unexplained is a haunting and unsettling bi-weekly podcast about strange and mysterious real life events that continue to evade explanation. A story-based show mixing spoken-word narrative, history and ideas - often to terrifying effect - that explores the space between what we think of as real and what is not; where sometimes belief can be as concrete as ‘reality,’ whatever that is… More info at www.unexplainedpodcast.com and on twitter @unexplainedpod and facebook.com/unexplainedpodcast

It is thought that neighbours of the Evangelista family were reluctant to help the investigation into their murder, due to fear of reprisal from the culprit.  Or more pertinently, fear of reprisal from La Mano Nera, or the Black Hand, who many suspected was ultimately responsible for the murders. But who were The Black Hand and were they even real at all? Go to twitter @unexplainedpod, facebook.com/unexplainedpodcast or unexplainedpodcast.com for more info. Thank you for listening. See omnystudio.com/listener for privacy information. ... Read more

Best Philosophy podcasts to listen in 2020